Most of the time we enjoy talking about Bitcoin and explaining what it is and how it works, but sometimes explaining the alien foundations of cryptocurrency can get slightly monotonous. We at BitcoinsBerlin do it a lot, but some days you’re tired and just want to have a normal conversation. That’s why we invented CatHats4Cats.com, our fictitious, yet descriptively named company. I think the longest someone has believed us is 2 days. 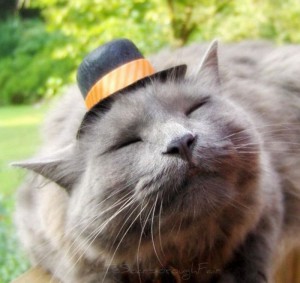 Tired of talking about Bitcoin? Make up a new job.

I’ve told you everything. I’ve given you all my best analogies and described Bitcoin in layman’s terms as best as I know how. I created a wallet for you and gave you 1mBTC for which you thanked me with a beer. I even showed you that wonderfully pastel-coloured video. I did everything I possibly could and have been talking at you for half an hour. Yet, you still don’t have a clue what I do or why it works.

What’s even more frustrating than people not understanding Bitcoin, is people claiming that they do understand it when they don’t. I met an extremely annoying Canadian, which is strange as I like nearly all of the Canadians I meet. I gave her the ’2 minute’ version of what it Bitcoin. She paused for a second before replying,

“Well.. a little bit, but it’s also its own currency.”

You understand? You really understand? I mean, it took me a lot longer than a 2 minute conversation to understand Bitcoin, but you got it straight away. You must be some kind of fricking genius. Why aren’t you in government or in a research lab solving the world’s problems instead of drinking watered down rum and coke’s in a bar full of white people?

Oh, Dread Pirate Roberts, you scurvy, and utterly doomed, pirate scumbag. Thanks to you, Bitcoin has a drug hangover that it will not shake off for another 5 years. To be fair, if you hadn’t had done it, someone else would have.

Ah, Roberts, because of you my family thinks I’m a drug dealer.

How many times can China ban Bitcoin? I think I’ve counted at least 3 so far. Just ban it and get the whole thing over and done with. Done fake it or stagger the announcements. Anyone working inside the Bitcoin ecosystem knows that it’s kinder just to publish the bad news straight away opposed to dragging it out for as long as possible…

The Chinese for Bitcoin is 比特币 (Bǐtè bì). Whenever you hear this, start selling.

Magic the Gathering Online Exchange never completely forgot it roots and it certainly still had some tricks left up its sleeves. A typical day in Tokyo might have gone a little like this:

“For my next trick,” shouts Karpeles, from upon an upturned bucket set in the middle of their Tokyo office. He is clothed only a red dressing gown and the whites of his eyes are showing. “For my next, trick I shall crash the Bticoin market for a third time.”

* Poof * and the Bitcoins were gone.

Just after I had managed to convince my friends and family that Bitcoin was fueled by more than its drug smuggling, money laundering, baby-killing capacity. MtGox comes and performs one last trick, covering everything and anyone in the Bitcoin scene with a thin veil of shit.

Anything your parents say about Bitcoin

British parents believe it healthy to have some degree of knowledge about their progeny’s occupation. I find it somewhat sweet when my mother asks me how Bitcoin is doing this week.

What I do not appreciate, however, is when they try and advise me in some way. After the recent MtGox nightmare, the media’s coverage of Bitcoin had once again become overwhelmingly negative, prompting my mother to call me. “Ben, I saw something in the news today. I think Bitcoin is finished. It’s over.” Yes, thank you mum. I’ll get on that right away.

Mother: when will you get a real job?

Yup. You got me. I was trying to sell you a wholesale bundle of bitcoins and energy drinks. You’ll make your money back straight away - I promise.

Fuck! I knew I should have looked at the internet this month.

This man is not related to this article in any way whatsoever.

“But there is no value behind Bitcoin right?”

No there is not. Bitcoin is backed up by nothing other than the belief it has value… like euros, dollars and every other fiat currency. Let’s lament the gold standard together, dear friend.

Looking to getting rid of your poisonous cryptocurrency quickly?

One Response to “10 things Bitcoiners hate to hear”